CARTS is a suite of z/OS software solutions that are designed to meet the unique challenges of maximizing your removable storage media utilization. When you put CARTS to work in your data center, you will see real cost savings and operational benefits. Using CARTS to manage your removable media will significantly reduce your need for additional tapes, racks and tape hardware. 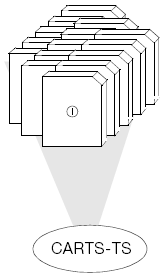 MountEliminator can significantly reduce the number of tape mount requests when dataset I/Os can be satisfied from disk rather than tape. Also, batch throughput is usually faster because there is less contention for tape drives with fewer mount requests.

Datasets can be read directly from tape after they have been stacked. Datasets do not have to be loaded back to disk to be read or written.

MountEliminator maintains original dataset creation statistics in the TMC. MVS and TMC catalogs remain in control, just as they do with regular CARTS-TapeStacker stacking. You control the number of DASD volumes allocated to Mount Eliminator by specifying which DASD esoterics MountEliminator can use. You also control which datasets are redirected and which are written directly to tape, with MountEliminator Control files. If you like, you can have MountEliminator leave some datasets on disk permanently, thus changing dataset storage without having to change your JCL.

Generation Data Groups (GDGs) are regarded as a single dataset and are redirected.

A dataset with any other file number is excluded.

Datasets are excluded from redirection by MountEliminator if the dataset’s JCL contains the following:

CARTS supports tape robots and their accompanying software from the following vendors: