With PIE/CICS you can build secure menus that contain multiple applications and transactions without changing existing CICS applications. When used as a CICS based application, these menus greatly simplify site navigation and shorten learning curves.

Eliminate the need for the user to Sign On to each application and/or transaction. PIE/CICS seamlessly authenticates users to external security systems (RACF, CA-ACF2, CA-Top Secret) and to internal application security. PIE/CICS Single Sign On saves valuable time and reduces user frustration.

PIE/CICS-Availability Plus is an optional PIE/CICS component that provides dramatic CICS transaction response time improvements. An important part of improving response time is reducing the time a task waits in a queue before being dispatched. Typically, as the load increases on a CICS system, more tasks are queued waiting for system resources. At some point, average response time becomes a function of queue length. With a light load (less than 50% CPU usage), queue wait times are usually negligible. However, as the load approaches about 50-70% of CICS capacity, queuing time begins to increase exponentially.

As you can see from the graph below, while you may be using only half or three quarters of your CICS capacity, average response times become unacceptably long before the maximum capacity is reached. 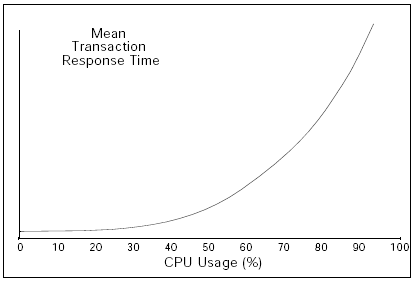 PIE/CICS-Availability Plus solves typical load balancing problems by allowing multiple AORs to process similar transactions. This gives you more capability to distribute work evenly across your AORs. For example, when transactions must run together in the same AOR, you can route the whole group to several AORs to evenly distribute the combined load.

If a single application has an extremely heavy load, you can isolate it and duplicate the work across several AORs.

If you want, you can distribute the load evenly by sending all your transactions to two or three AORs. PIE/CICS-Availability Plus automatically routes transactions to the appropriate AOR using one of several load balancing techniques. Because you have more control over load balancing across regions, you can minimize the occurrences of an AOR reaching its limiting capacity while other regions remain relatively idle.

PIE/CICS-Availability Plus often reduces the required number of AORs users create for their systems. Because users under MRO alone often want to avoid the difficulty of calculating a proper load balance, they create separate AORs for every major application; however, too many AORs can increase response time because each region requires a separate MVS address space. With more memory in use, MVS must perform more paging, degrading performance.

With PIE/CICS-Availability Plus, however, you can combine transactions into a single group and create several AORs to run all of them. The net result is fewer AORs, reducing total paging in your MVS system. Once again, response time is improved.

XRF has a severe limitation: the backup regions are only partially initialized. It can take several minutes for a backup region to completely initialize, which is too long for critical applications.